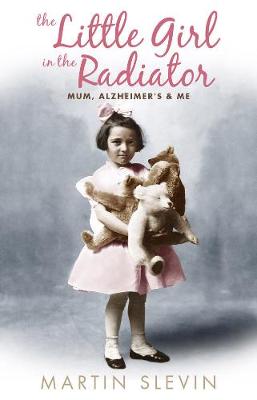 The Little Girl in the Radiator: Mum, Alzheimer's and Me

A hilarious, heart-breaking and ultimately uplifting story of love, loss and family.

Martin Slevin’s mum is an active and fiercely independent woman who runs her own business and brooks no nonsense from Martin and his father.

But when her husband dies everything crumbles, and she becomes listless and forgetful. Eventually, she is diagnosed with Alzheimer’s disease and Martin puts his own life on hold to care for her.

Together, they embark on a long journey through dementia. The destination is never in doubt – but it’s a comical and unpredictable ride, as she watches TV with a frozen goose, holds sing-songs with an imaginary Irish band and insists on pinning all of Martin’s socks to the wall.

And all the time, a question nags away at him: just who is the little girl in the radiator, with whom his mum has urgent, whispered conversations each day?

Read the first chapter of The Little Girl in the Radiator.

Very well written. Puts a lot of things associated with being a carer of a parent with Alzheimers into perspective.

A truthful real life account into the life of a son caring for his mother with Alzheimer’s. Heartbreakingly sad yet humourous at the same time, this book effectively sheads light into this hidden world of illness and loneliness. Reccomeneded for all those touched by this disese.