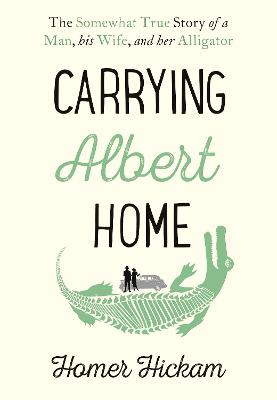 Carrying Albert Home: The Somewhat True Story of a Man, his Wife and her Alligator

A journey of a thousand miles. With an alligator on the back seat. And John Steinbeck as a passenger. This is a tale where everything is true, except the bits that are made up.

In 1930s America, the Great Depression made everyone’s horizons smaller, and Elsie Lavender found herself back where she began, in the coalfields of West Virginia. She had just one memento of her halcyon days a baby alligator named Albert.

Then one day, her husband’s stoical patience snapped and Elsie had to choose between Homer and Albert. She decided that there was only one thing to do: they would carry Albert home to Florida. And so began their odyssey a journey like no other, where Elsie, Homer and Albert encountered everything from movie stars and revolutionaries to Ernest Hemingway and hurricanes in their struggle to find love, redemption, and a place to call home.

“It is brilliant because the idea of taking a crocodile in a car anyway is absurd but that is exactly what they did. It is a very funny story which you cannot fail to laugh about.”

A delightful, quirky, ‘almost true’ story woven around the adventures of Homer Hickam’s parents in the early years of their marriage. The unusual wedding gift of a baby alligator outgrows their home in the coalfields of West Virginia and Homer and Elsie decide Albert has to be returned to his native Orlando. The journey is long and eventful and joyous. A simple tale garnered from almost forgotten family memories. So perhaps it is not entirely true? No matter. I really enjoyed the book. Did I mention the rooster?

Carrying Albert Home by Homer Hickam is a quirky, heartwarming road movie of a book full of endearing characters who charm their way through the pages and is perfect for fans of The Unlikely Pilgrimage of Harold Fry. Albert is an alligator who is being driven the 1,000miles home to Orlando by the married couple (Homer’s parents) who own him and we witness a series of delightfully funny, sometimes laugh out loud so, vignettes as they make their way through the southern states of America. With a rooster. The telling is tongue in cheek and probably should not be read literally as even when guns are brandished and lives endangered Hickam persists with his light hearted delivery. On occassion this jarred a little but overall it was a thoroughly enjoyable story with some serious messages about life, love and what makes a relationship.