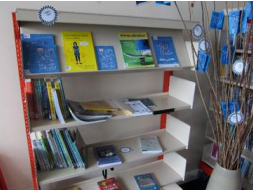 Researchers from the University of Westminster have carried out an independent evaluation of the impact of Reading Well for young people, funded by Wellcome. For the study, three sets of the book collection were brought into The Priory School, a secondary school in Hitchin. One set of the books was also given to Phase, a local charity working alongside young people to promote wellbeing.

Staff created a wellbeing corner in their library, and designed feedback cards which were placed alongside the books. Every week one of the titles on the list was selected as the book of the week and promoted in the library, via the school newsletter and on every digital screen in the school. Staff at Phase also recommended books from the list to the young people they were working with. The researchers then analysed borrowing data and interviewed young people and staff about the effects of the scheme on mental health and wellbeing.

The groups reported a wide range of positive benefits from using the scheme, including increased knowledge of mental health conditions, where to go to seek support and emotional and mental wellbeing. One young participant also suggested that the booklist would be useful to help parents and teachers better understand and more effectively interact with young people experiencing mental health conditions. Another student explained how it had supported relationships with siblings:

“my [sibling] suffers from anxiety, and anger issues are quite severe, and before I didn’t really understand it. […] So I would get a bit cross with them, the way they acted. […] But after reading a book about anxiety it’s made me much more understanding, it also changed my actions to them.”

The most popular book during the study was I Had a Black Dog by Matthew Johnstone, which actually fell apart from overuse. During the evaluation, another local secondary school in the area decided to also invest in the book collection thanks to its popularity with students and staff.