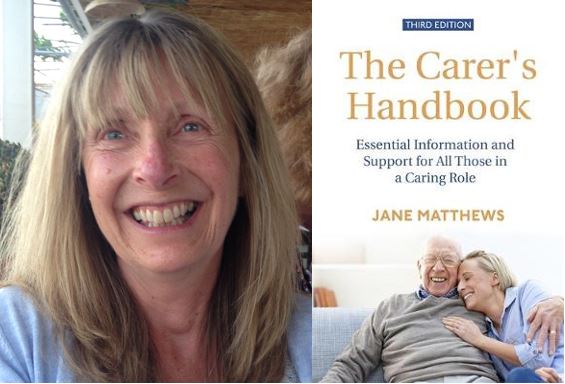 In this guest blog, The Carer’s Handbook author Jane Matthews talks about her journey as a carer and why it was time to write a new edition of her popular Reading Well for long term conditions title.

My life as a carer began without me even noticing. My uncle was diagnosed with cancer and I was the only family member living close enough to help.

Over the next five years I became his personal assistant and advocate, his taxi service, housekeeper and spokesperson – while at home two lively under 10s also wanted my time and attention. And there was the small matter of keeping my own job going.

It was just about manageable so long as nothing extra or unexpected cropped up. But this is real life so it inevitably did. Much of the time I felt like an overwound clock, ready to snap if anyone or anything exerted the slightest extra pressure.

Sadly, through it all, none of the health and social care professionals we encountered mentioned support services that might have helped me to help him.

So after my uncle’s death I was determined to write the guide I wish someone had handed me before I even realised there was a name for what I was doing.

A new edition for a new era

Times have changed since The Carer’s Handbook was first published in 2006. There is perhaps a little more awareness, as well as more legislation aimed at supporting carers and those they care for. Unfortunately, the budgets needed to deliver that support are more squeezed than ever so accessing help often still feels like an uphill battle.

I speak from experience, having been a carer once again for the last 10 years, this time for my mum. It seemed a good time to revise and thoroughly update The Carer’s Handbook for a new decade and a new generation of carers.

No two carers experience their role the same way and it’s important to say that for many there are some really positive aspects to caring for a sick or disabled loved one. But despite the existence of many excellent carer support groups locally and nationally, the facts are that every day 600 people leave their jobs to care, many of them because juggling roles has become too difficult; two thirds of older carers says it’s badly affected their mental health; and more than half say they’ve had to borrow money as a result of their caring role.

Alongside updating all the practical sections on assessments, rights, money and work, I’ve paid more attention to carers’ health and wellbeing. Many carers I spoke to told me the chapter that helped them feel less alone was advice on handling feelings such as resentment, anger, loss, anxiety and guilt.

There’s more on self-care, since every carer I’ve ever met seems to place themselves somewhere beneath the family pet when it comes to looking after everyone else’s needs, and on setting boundaries: carers tend to be copers, right up to the point they burn out…

My own family suggested I write a section for relatives and friends on how to support a loved one who is a carer. And other carers asked me to include advice for those hard-pressed health and social care professionals (by which I mean waged – most carers I know are the last word in professional) on how to help us help them.

There are expanded sections for young carers, on choosing residential care, on how being a carer can impact on all your relationships, and on handling the fallout when you stop being a carer. For some carers what they thought would feel like relief turns out to be more like a wilderness.

At some point in our lives three out of every five of us will find ourselves caring for a friend or family. I wrote this book as an act of friendship and support for the estimated seven million people who are caring right now. My greatest hope is that it will go some way to plugging a few of the gaps, pointing them to services and wellbeing practices that will make their lives a little more manageable.

The 3rd edition of The Carer’s Handbook was published by Robinson in February 2019 and appears on the Reading Well for long term conditions booklist. It is available to borrow for free from public libraries across England.