Reading Well for young people was launched nationally on 12 April with 90% of public library authorities delivering the scheme. Excitement about the new booklist was not only seen at the national launch and in press coverage, but countrywide as local libraries ran an array of fantastic events and promotions. 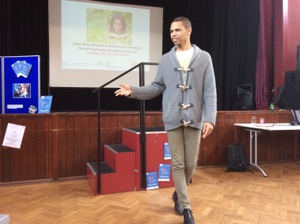 Throughout the week libraries tweeted photographs of their Reading Well for young people book list in fantastic displays. You can see all of these in our Storify roundup.

Highlights included St Helen’s Libraries with their colourful display, which is covered in the Find shelf help in your local library tag line. The most inventive photo on Twitter came from Newcastle Libraries, leaving us to work out where the young person ended and the book cover began. 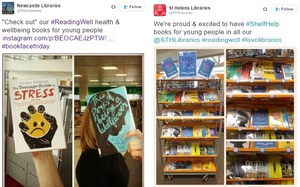 Shropshire Libraries ran lots of events including a Drumming Workshop on 15 April at Bridgnorth Library, and a Smoothie Bar and chill out zone with Young Health Champions and a choir at Shrewsbury Library on 23 April.

Find out more about the Reading well for young people titles here.

Email us or contact your local library for more information about the scheme.

Reading to cope with bereavement and grief

Reading has the power to offer comfort, solace, and advic...

Libraries can bring reading and nature together, perfect ...