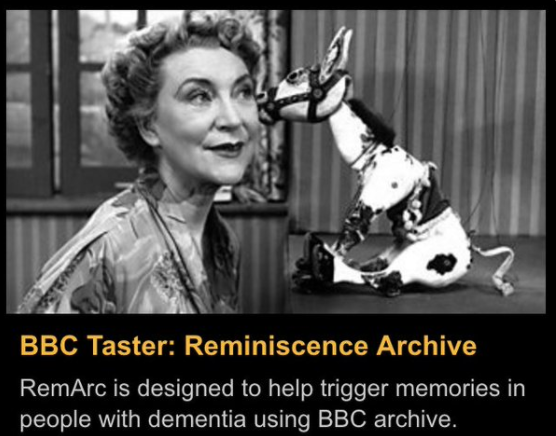 BBC RemArc, or Reminiscence Archive, is a free online programme using BBC Archive material to stimulate memories in people with dementia, supporting them to live well. The material has proved incredibly popular: it was accessed over 100,000 times in the past 4 months.

RemArc contains around 1,500 photographs, videos and audio clips that are organised both thematically and by decade. The material has been found to trigger memories which spark conversations, enhancing relationships between people with dementia and their carers.

The BBC worked in partnership with clinical researchers to create RemArc, which was then extensively tested on people with dementia through the Alzheimer’s Society. The testing process gathered feedback from the participants and incorporated all the suggestions into an updated design, which was relaunched in this year.

RemArc is browser-based so can be accessed anywhere, from any device with an internet connection. The software was specifically designed to be used on a tablet, as this format is easiest for people with dementia. All the content is open source and is free to reproduce non-commercially, so users can mix content with other material like local history collections to create area-specific memory triggers.

Many library services are beginning to use RemArc as part of their dementia offer, alongside the Reading Well Books on Prescription for dementia scheme. Southwark Libraries held a RemArc introduction session as part of their programme of events for Dementia Awareness Week.

If you’re interested in using RemArc, the BBC has created a one page introduction for anyone who’s interested in the service, as well as a user guide for families and carers.