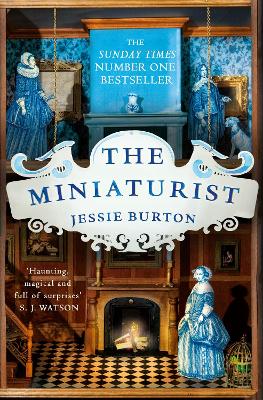 There is nothing hidden that will not be revealed . . .

On an autumn day in 1686, eighteen-year-old Nella Oortman knocks at the door of a grand house in the wealthiest quarter of Amsterdam. She has come from the country to begin a new life as the wife of illustrious merchant trader Johannes Brandt, but instead she is met by his sharp-tongued sister, Marin. Only later does Johannes appear and present her with an extraordinary wedding gift: a cabinet-sized replica of their home. It is to be furnished by an elusive miniaturist, whose tiny creations mirror their real-life counterparts in unexpected ways . . .

Nella is at first mystified by the closed world of the Brandt household, but as she uncovers its secrets she realizes the escalating dangers that await them all. Does the miniaturist hold their fate in her hands? And will she be the key to their salvation or the architect of their downfall?

Beautiful, intoxicating and filled with heart-pounding suspense, The Miniaturist is a magnificent story of love and obsession, betrayal and retribution, appearance and truth.

Almost everyone finished the book apart from one who felt she really could not finish it as she did not enjoy it at all.

Everyone had a real problem with the end of the book, we felt that it was very hurried but at the same time it had too many lose ends and not enough clarity to it.

We all enjoyed the fact that we were reading about women becoming stronger through the book, while the men in story became weaker and weaker. We were essentially watching the unravelling of this family group as the various rules outside the house were gradually seen to be being broken within the house. This was an interesting discussion point within the group. We all decided we enjoyed watching Petronella becoming such a strong woman who really tried her best given the circumstances to protect her family.

We also discussed the whole aspect of the miniaturist and why she was in the book at all. Some people felt that she was somewhat pointless and just confusing, while others felt she was an interesting gothic element along the lines of Daphne Du Maurier.

We felt that the ending of the book means that there is hope, even though such tragic things happened during the rest of the book. We kind of want to know what happened next, but understand that we’ll just never know. We also wanted some kind of short story about the miniaturist to explain where she came from and where she went.